Birdlife on and around the Old Man of Hoy 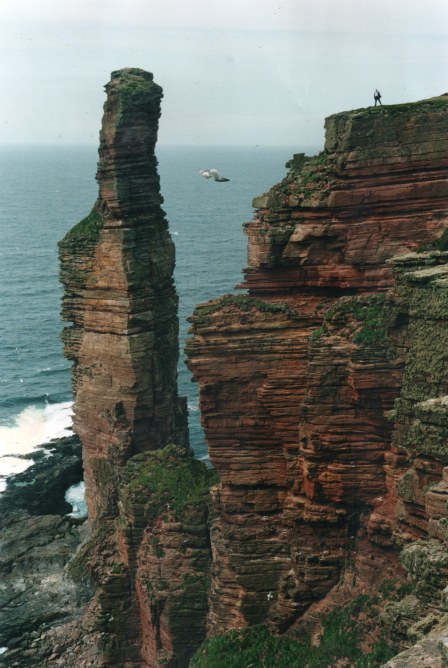 image  from Terry Thomson
The Fulmar is the bird most easily sighted at the Old Man. Although gull-like at first glance, it is a member of the petrel family and so more closely related to albatrosses than gulls; it can be identified by its tubular nostrils, straight-winged flight and black smudge around each eye. In the breeding season (from May through to September) a good number of fulmars nest on the Old Man and this can prove unpleasant for climbers; when disturbed or feeling threatened, the fulmar will spit a foul-smelling liquid at the intruder. Only one egg is laid per pair, and in the summer the white, fluffy chicks are easy to spot on the rock ledges.

In the breeding season there are usually a  small number of Puffins on the Old Man or nearby cliffs. The puffin is unmistakeable with its brightly coloured bill and orange feet. It winters out at     sea and so will only be seen at the Old Man during the summer, when it returns to the cliffs in order to breed.

The Black guillemot is known locally as the tystie. It is about the size of a puffin and in summer, easily identified by its distinctive black and white plumage, and red feet. In winter the plumage is less striking; the white wing patches remain but the black plumage becomes uneven and barred with white.

Although similar in appearance to razorbills, Guillemots have a more slender body and bill. They winter out at sea and so are unlikely to be spotted from the Old Man outside of the breeding season.
The bill of the Razorbill is distinctive, and the easiest way to tell it apart from the guillemot. Like the guillemot, the razorbill winters out at sea.

A powerful and predatory bird, the Bonxie or Great skua is a parasitic feeder and in summer can sometimes be seen bothering other birds, such as gannets, for food. It nests on the ground and is hard to miss around the Old Man during the breeding season, when it will dive at anyone who strays too close. Outside of the breeding season, it is usually offshore.

The largest of all gulls, the Great black-backed gull is easy to tell apart from other gulls, by its size and broad black wings. It is a predatory bird and will prey on other seabirds and their young during the summer months.
From the Old Man it is possible to see Gannets flying further out to sea. Graceful in appearance and flight, the gannet is easily identified by its pale body and black wingtips. It often performs spectacular dives whilst hunting for fish.