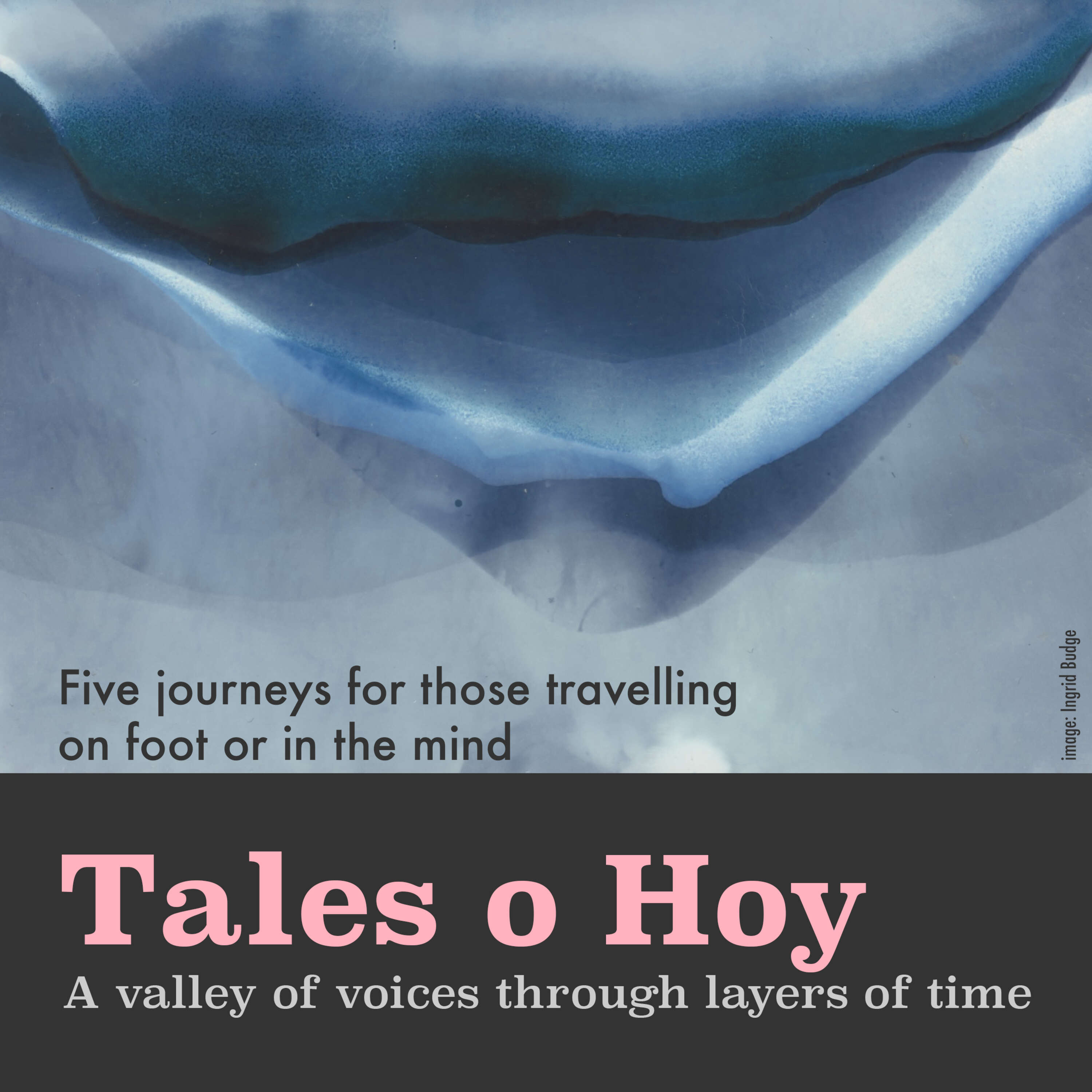 Whether you want to see him at a distance from the headland or get up close and personal, you must go and visit the Old Man, or at least wave to him as you pass by on the ferry.

In Bleau’s map circa 1600 and in Mackenzie’s 1750 map, the Old Man is portrayed as a headland, not the stack we know today. He is believed to be less than 400 years old but of course he has been millions of years in the making. The Old Man has feet (or foot) of basalt rock, but his upper is of softer sandstone with layers of flagstone. The erosion of sandstone and the layers of flagstone give him his rugged appearance. His profile has altered over the years and like many old men, he’s not the man he used to be!

The artist William Daniell depicted the Old Man on two legs in his aquatint published around 1817. At the base of the Old Man you can see the remains of that leg, a mass of rock left when his arch collapsed against the storms. Daniell writes that his two legs are what gave him his name but Hugh Marwick suggests that it may be one of the few Celtic names in Orkney possibly deriving from the word allt meaning cliff and maen meaning stone. In fact there are other Old Men in Cumbria, Cornwall and Skye.

On your route to the Old Man you will pass closeby the croft of Bunnertoon. Once home to the composer Sir Peter Maxwell Davies. See more here.

You will find many wild flowers on your way. RSPB Warden for Hoy, Lee Shields, tells us what we might see. Find out more here.

The Old Man of Hoy has been a popular postcard since the late 19th century.

In the audio you will hear Margaret Reid. Margaret paid homage to the Old Man in needlework. Her embroidery was based on a drawing by Harry Berry. Harry came by her house and drew the Old Man of Hoy on the fabric and Margaret got to work with her needle.

The 1967 BBC televised broadcast of the climbing of the Old man was a landmark outdoor broadcast.

The operation was immense. Here vehicles and equipment are offloaded at Lyness.

Ann Sutherland’s photographs below document the day the BBC landed.

Chris Bonington and Tom Patey – who made the ascent in 1966 – took the East face of the Old Man, with Rusty Baillie as their climbing cameraman. The new South face route was scaled by Joe Brown – nicknamed the human fly – along with Pete Crew, Dougal Haston and Ian McNaught Davis. The climbing camera team was completed by John Cleare, Ian Clough, Hamish McInnes and George Wagland. (BBC)

At 450 feet (137 metres) high, the Old Man is a striking figure. His solitude has sparked poetic response and on more than one occasion a mermaid was seen circling, perhaps hoping to comfort the lonely man. Billy Budge of Longhope penned a song about the exciting, and at times bewildering, 1967 televised climb, in Billy’s song the Old Man is taken to America to be wed to the Statue of Liberty.

Many years later when magician David Copperfield astounded the world by making the Statue of Liberty disappear, Orcadian Ann Sutherland wrote to Paul Daniels asking if he could create the spectacle using the Old Man with on-lookers watching from the ferry. He said no. One person who said ‘Yes’ was Laura McKenna who agreed to a proposal of marriage made on top of the Old Man.

We would like to hear from you if you have climbed the Old Man of Hoy. At Hoy Heritage Centre we are starting a roll call of all the people who have made it to the top.

To join the exclusive Old Man Club tell us your name and when you conquered the Old Man. Contact us here.

Whisky, sticks of rock, shortbread, oatcakes and fudge have all used the image of the Old Man to announce their Orcadian allegiance.

Some lucky second hand shoppers can still find vintage Old Man of Hoy memorabilia, and if you are very fortunate you might find plaster plates made by Harry Berry. Harry also made matchbox holders where you struck your match up the Old Man.

Here below are examples of the Old Man selling Orkney from the Stromness Museum collection.

He is a well loved resident of Hoy, possibly our most famous, and if he ever does fall into the sea, he’ll be very much missed. Long live the Old Man of Hoy!

On now to our final episode travelling the New Road.